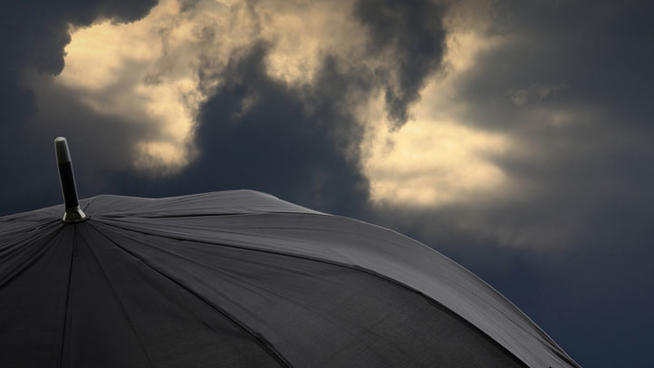 “I think there’s a poet who wrote once a tragedy by Shakespeare, a symphony by Beethoven and a thunderstorm are based on the same elements.”

It dawned on me last night–as I watched a storm roll in over my home in Broomall, Pennsylvania with my ever-enraptured oldest minion, Cara on one side of me and my youngest, I-could-give-a-sh*t-about-a-thunderstorm-I-just-want-my-ba ba minion, Natalie on the other–that I’ve been writing for years. Decades, actually. Depending on who you ask, I’ve been writing since I was between 10 and 13 years old (whenever I wrote that fully illustrated short story about meeting Bruce Springsteen; I’m still waiting for Mom to confirm). I’m now almost 38 (SHIVER). I’ve published a novel, am 118 pages deep into another and in the time between then and now I have written little to nothing about my love of a good thunderstorm. A sublime love, really. In truth? It’s one of things that I enjoy the most in my life on this side of the proverbial wormhole of existence. All sun and no storms makes Frankie a dull boy.

Doctor Sleep, the sequel to The Shining by Stephen King, coming soon to a bookstore near you. I’ve already pre-ordered my copy. Have you?

I’m not quite sure why I’ve never written about thunderstorms before now. I can pinpoint one or two possibilities. The easiest? That some things are just too awe inspiring to explain. Sure, I can describe what a thunderstorm looks AND feels like… can write about the way everything falls silent seconds before the first drops of rain begin to fall… can ruminate at how charged the air feels, so much so that the hairs on your forearms and the nape of your neck stand on end. I can write about that smell… you know the one? That sharp, metallic smell that precedes the first lightning strike. But even that feels insufficient. For me, trying to describe a thunderstorm is like trying to describe God, or rather, my concept of what God is (not necessarily the same as yours but no worries: Variety is the spice of life). I can do so using a f*ckload of superlatives like “awe inspiring” but I’ll never get close. Some things simply defy explanation. Thunderstorms are like that.

The other possibility? Not so easy to describe, not even using superlatives. Thunderstorms are invariably linked in my mind to my Biological. Once upon a time, ’cause all good stories, and even a few of the not-so-good ones begin as such, my once-Dad was a storm chaser. Before “Storm Chasers” existed. He’d gather up his son–me–pile him… ME into whatever second hand car he was driving at the time, and drive off after the lightning and the thunder. He never used a map, nor did he use GPS (Tom-Tom and Garmin weren’t exactly in wide use back then and had they been, he wouldn’t have been able to afford them anyway). He “followed his nose.” More often times than not, his nose was pretty accurate. I can remember multiple times when we found ourselves in the middle of the nastiest part of the cell. We’d follow it as far as we could for as long as we could, until such time as either A.) We got low on gas or B.) Found our road blocked by a fallen tree or other obstacle. But he… WE never tired of the chase. If we stopped and turned around, we did so because of an extenuating circumstance or two. Never out of boredom.

Fast forward X-amount of decades to last evening as I watched a pretty nasty cell roll over my… over OUR home in Broomall, Pennsylvania. You know, the one I share with Mama Bear, Biggish Bear and Smallish Bear. Cara–Biggish Bear–has always been fascinated with thunderstorms. Never afraid of them. Quite the contrary, actually: She loves them. She loves the “ziggy-zaggy” lightning and the “s’raining, Daddy, raining!” She’s not a huge fan of thunder… she generally cringes when an unusually large clap of it shakes the house or the car, but she understands that there is something called “God” and that God–whatever your idea of him, her or it is–occasionally likes to go bowling like her Pop-Pop does. Hence “thunder,” otherwise known as the sound of God getting a Strike. As for power outages? Well, despite Broomall’s notoriously fragile power grid, we haven’t had an extensive one since Hurricane Irene rolled through back in 2011 and I prefer it that way. Cara doesn’t like the dark. Something tells me she’s going to be sleeping with her fish tank light and her desk lamp on until she’s a teenager. Oh well. Acknowledged. Time to move on.

It’s no secret to anyone that’s been following “Random Musings” in it’s newest incarnation–Version 2.0–and/or it’s earlier one–Version 1.0–that I’ve got a few well-documented Daddy Issues. I’d really rather not recap them for you, herein. If you’re curious about them (which I highly doubt but hey: To each their own), you can check out “The Man I Once Called Dad.” It’s about as comprehensive a listing as exists. It’s also one of my all time most-viewed blog entries on either version of “Random Musings.” Go fig. I guess some people were interested once upon a time. Regardless, you don’t need to be familiar with it or my psyche to understand this next part. Having kids? It’s was tough for me to initially agree to it. I’ve always wanted children, but for a time, I was standoffish about it. Why? Because I was fearful of making the same mistakes that my own father, AKA The Man I Once Called Dad AKA my Biological made with me. ‘Cause I’m a lot like him. He was… IS a writer. Me, too. He’s wordy. Me, too. He loved Stanley Kubrick’s version of “The Shining.” I maintain that it is one of the freakiest movies I’ve ever seen, albeit no where near as good as the book was. He loved… LOVES thunderstorms (I’m sure). Me? See above.

But in the end, I conceded that my misgivings about having children and my undeniable similarities (appearance wise, too) to my father were not enough to keep me on the sidelines. I wanted to be a Dad. Daddy. And now? I’m one times two. Both girls… thankfully. I’ll not lie: The idea of having a son still kinda’ freaks me out. Not as much because of the whole “making the same mistakes as my own father made” thing. No. Not anymore. I’ve made my bones as a Daddy and while I’m still learning… ALWAYS learning, I think I’ve done a pretty serviceable job despite certain mental handicaps, i.e. my always overactive psyche. But because I simply can’t envision a smaller version of me in the world. A living, breathing, walking and talking facsimile of a smiley face with a graying beard, a pot belly, an aversion to anything green (broccoli? Can’t do it) and a fondness for Velveeta cheese? Not to mention wordiness, and a love of Stephen King and Stanley Kubrick? He sounds like a nightmare. What would Mama Bear do?

But I digress. Despite the fact that my daughters are, at an early age, undeniably more like my wife than me (though Natalie belches like a champ and Cara thinks it’s funny to “toot” on you, two very, not-so-endearing traits that are reminiscent of me and my well-documented, sophomoric sense of humor) my oldest has adapted one characteristic that is undoubtedly mine: Her love of thunderstorms. As she watched, awe inspired last night, gasping at every lightning strike no matter how minor, I found myself smiling. Because she looked SO MUCH like I’m sure I did back in the day, before divorce lawyers and visitation rights forever tarnished my youthful naivety at an early age. I’ve always focused intently on what happened AFTER that moment–the day when the Man I Once Called Dad took me for a walk along the Delaware Bay Beach in North Cape May and told me that he and my mother were separating–and how my experiences thereafter turned me into the man I am at almost 38. But I’ve rarely ruminated on my life BEFORE. Probably because I don’t remember much of it.

But I remember thunderstorms. They pre-date my short story about meeting Bruce Springsteen. They pre-date the end of my mother and my once-father, now Biological’s marriage.  They LONG pre-date my first reading of The Shining and my first viewing of “The Shining” but, in the case of the latter, not by much. What can I say? I watched a lot of seriously f*cked up sh*t when I was a kid, thanks largely in part to you-know-who. They pre-date Mama Bear, Biggish Bear and Smallish Bear, Tom-Tom and Garmin, blogging, Hurricane Irene, one published novel and one novel that’s 118 pages to the good as of last night. In short? Save for my mother and my sister, both of whom I love immensely, they have been the lone constant in my life the longest. And to not ever write of them and what they mean to me would be… IS a disservice. I write plenty about God. Why hesitate to write about him bowling?

Because some things, like God and his ever-present quest for a perfect 300 frame are indescribable. Some things? They’re deeper than writing. Some things you can’t explicate. You just FEEL them. And as I watched  my storm chaser in training, Cara last evening out of one eye and my Greens-loving Natalie “You-Take’a-My-Ba Ba-I-Break’a-Your-Face” out of the other, I felt something that I hadn’t felt in a long time. And I smiled. ‘Cause all sun and no storms really DO make Frankie a dull boy. But only partially. For the first time in as long as I can remember, I felt youthful. Naive. At peace with my ever-present Daddy Issues and my at times turbulent past. And now? Almost 24 hours later? Well, they’re calling for another round of “ziggy-zaggy, s’raining, Daddy, raining” tonight. It’s going to take every ounce of restraint that I have in me to keep from grabbing my girls, throwing them in my car and heading off in search of the nastiest part of the cell.

A girl travelling around the world on a motorcycle.