“Five ear infections in nine and a half months. That has to be some kind of record.”

So read the text message that I sent my wife this AM upon finding out that our youngest is yet again suffering from an ear infection. The good news? At least this one is not a “raging, double ear infection” like the last one. Seriously? Some doc’s watch too much “Grey’s Anatomy,” i.e. they’re incredibly over dramatic about the conditions that they diagnose. They treat every sniffle like Ebola and every case of Pink Eye–Conjunctivitis if you want me to get technical–like the Plague.

That is by no means an indictment of every doctor that coexists with me, here in my subjective reality. My wife, for example, is a PharmD and she’s not over dramatic though she was, once upon a time, an avid follower of the “Grey’s Anatomy” soap opera, both onscreen and off. One of my best friends is a doctor and he is arguably the straightest shooter that I know. But many of them? I’ve encountered my fair share over the course of my 37, almost 38 year life on this side of the proverbial wormhole of existence and let me tell you something: I’m not over exaggerating. I’ve wondered often if the whole “see a doctor, see a specialist” thing isn’t an elaborate, money making scheme that they learn about on day one of med school, along with the Hippocratic Oath and the difference between an elbow and an a**hole.

Am I wrong? Who knows. Whether I am or am not is irrelevant. Perhaps it’s all legit and above the board. This might just be a brain fart–an accumulated bubble of Mental Flatulence that I’ve been mulling for years. While I can’t speak accurately on the topic of whether “specialists” are a limb of the many tentacled conspiracy that is health care in 2013 (and I wouldn’t want to; after all, I did vote for Obamacare by virtue of voting for Obama), I can say with a good degree of certainty that the drama? It exists.

Consider: There is a whole generation of doctors like my wife and my good friend the straight shooter that have entered the working world in the last half decade. Many of them were inspired to become doctors by television shows like “Grey’s Anatomy” and “Scrubs”, along with older ones like “ER” and, in a few isolated cases, “St. Elsewhere.”

Okay, really? If you’re a doctor that has entered the profession in the last half decade due in part to the impact that “St. Elsewhere” had on you there’s something seriously wrong with you. I know med school takes a while but “St. Elsewhere” went off the air in 1988. Assuming you were of the Age of Reason–seven–in 1988 you would need to be at least… what? A 27 or 28 year old Resident at the least? That means that by the time you’re done your Residency you’ll be approximately 30. Guess what? Unless you’re in spectacular shape things start to go downhill after you hit the big 3-0. I’m not saying that your hands shake and your body gives out, but your mind begins to get a little wonky. You develop conditions that you need to go and see a “specialist” about. You feel the cold, rubber encased and lubricated index finger of time diddling your a**hole and you realize that even Doctor Doug Ross had gray hair by the time “ER” went off the air in 2009. Don’t believe me? Just wait. Your time will come.

All I’m saying is I that there’s no way in H-E-double hockey sticks that I’m letting a mid-30 something, new doctor care for me. I like my doctors one of two ways: Young and inexperienced or old and grizzled. That’s it. If one of my mid-30 something friends came to me tonight and said, “surprise, Frank! I’ve been secretly attending med school for the last six years. That’s why I missed ‘Kilt’ night (as in the Tilted Kilt in King of Prussia, Pennsylvania) this past Saturday but good news: I just graduated and I’d love it if you would be my first patient.”

Well, guys? Despite my loyalty to that friend I’d either A.) Come up with an elaborate excuse not to see him or her or B.) Throw another of my friends under the bus. “Oh, thanks BLANK. I feel great despite the volleyball sized tumor protruding from the side of my neck but I hear that BLANK needs a Proctological exam. You should really call him.”

Interesting. In this hypothetical scenario, am I a good friend for sending business the newly minted doc’s way or a bad one for denying him or her mine, and recommending that he or she recruit one of my otherwise healthy friends to be a medical guinea pig? Along the same lines, another question: Why am I suddenly obsessed with a**holes? I’ve gone whole blog entries without mentioning the Chocolate Starfish but now? It may end up being a Tag by the time I’m done. Note to self: Try and resist referring to “a**holes” in what remains of this blog entry. And please resist the urge to use it as a Tag. That may be easier said than done. Once you get an a**hole on your mind, its tough to get it off. SHIVER.

I have no idea. The only thing that I know for sure right now is that I’m tired because my youngest has another ear infection and hasn’t slept well since last Wednesday (it is now Monday night). Said exhaustion is compounded by the fact that I am currently dieting in an attempt to shed a few, extra pounds before the wedding I’m going to in two and a half weeks and am this close to chowing down on one of my limbs. I’d drink another cup of water but I’ve already downed six today. I feel like Violet Beauregard from “Willy Wonka and the Chocolate Factory.” The Oompa Loompas are singing “drinking, drinking, all day long” in my mind. Seriously? I’d make love to a bag of Doritos if you put one in front of me right now. Think I’m kidding? Try it, and please: Avert your eyes.

Which reminds me of something my wife told me last night. No, not about having intercourse with a snack food. This: 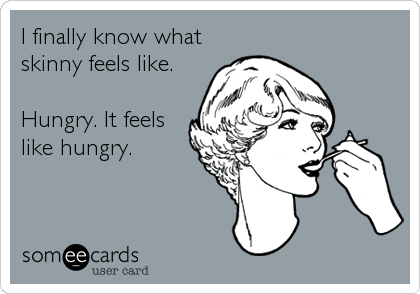 Begin parenthetical aside: I generally don’t think much of these when they clutter up my Facebook Feed. I think about as highly of them as I do of the “specialist” that informed me a few years ago that I had Fybromyalgia, only to inform me during our second appointment that he, too, suffered from it and “by the way, Frank: There’s a support group that I’m the chairman of that you can join for an annual fee of BLANK.” Shockingly? I was cured from that day forward and have never even mentioned FM as a condition that I suffer from since.

Until now. Consider yourselves lucky, guys. “Hi. My name is Frank Marsh and I suffer from a condition of exclusion called Fybromyalgia. I don’t know if its real or not but my ‘specialist’ told me that for X-amount of dollars, he’d diagnose me with any condition–exclusionary or otherwise–that I want.” He should have just told me that I was tired because I was overweight and out of shape. Maybe I would have dropped the weight I’m trying to shed now then. Maybe I’d be eating a bag of luscious, mouth watering Doritos right now and not a Nutrisystem, “Thick” Crust, Personal Pizza. Ever eaten cardboard with cheese melted on top of it? Trust me, guys: It’s more filling than this. I feel like a contestant on “Survivor: Delaware County.”  Yes, Broomall. The tribe has spoken.

Dieting? It’s a bitch. If you’ve ever tried it you feel my pain. If you’ve never had to diet good for you. And screw you. I want your rubber stomach and your skinny genes. No, not “jeans.” Stuff me into a pair of those things and I’d look like an over-microwaved hot dog. End parenthetical aside.

Back to the Rheumalogist that told me I had Fybro. That guy? He’s the guy that I think of when a doc tells me or one of my loved ones that we need to go and see a “specialist.” Regarding my youngest’s predicament: I understand that it’s in her best interest. I further understand that doctors, even the over dramatic ones that model themselves and their approach after the “Grey’s Anatomy” derived approaches of Doctor McDreamy and Doctor McSteamy. By association, “specialists” are a necessity in a world filled with sniffles and Conjunctivitis and, to a lesser extent, Ebola and the Plague. The whole thing may very well be an elaborate, money making scam, perpetrated by members of the medical profession but that doesn’t change the fact that as a dad, I’m locked in. I want the best for my children–I could give a sh*t about myself–and if “the best” includes taking them to multiple PhD’s, PharmD’s et al and not just one apothecary? So be it.

As I write this, it is 10 in the PM. Across from me, my wife the PharmD sits playing Candy Crush Saga on her phone. She’s waiting patiently for me to finish and I don’t want to disappoint her. About an hour and a half ago, I put my youngest, five time (“five time! Five time!”), ear infected daughter to bed. She’s whimpered once or twice but for the most part, she seems to be sleeping peacefully. That’s not to say that she won’t be waking up in the next hour or two. If she does? She does. Occasional sleepless nights are a part of being a parent. As are “raging double ear infections” and Conjunctivitis. She has an appointment with an ENT (Ears, Nose and Throad) “specialist” tomorrow AM which I will be attending. Hopefully the doc will offer my wife and I a less invasive solution than placing tubes in her ears. Who knows? About the only thing that I know for sure is that I want her to get better, and if that means giving into the slimy embrace of the many tentacled conspiracy that is health care in 2013? Well sh*t. I may be an a**hole sometimes, but I love my family.

Just no Greenhorn, 30-something year old medical professionals, please. Either under 30 or over 50. Experience optional for the former, but imperative for the latter.